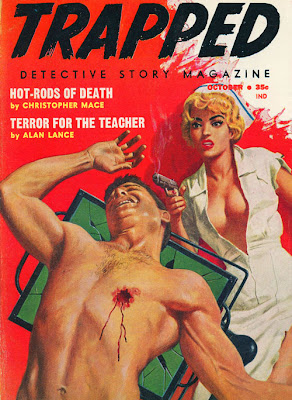 Like many young illustrators of his generation, John Schoenherr did whatever hack work he could find after leaving art school. So, while his science fiction and natural history output gradually gained steam, dozens of his early pieces wound up in obscure, lurid “men’s magazines”. Often uncredited or pseudonymous, these pictures were typical of the genre: violent, bloody, and bosomy. Such as this cover from Trapped Detective Story Magazine for October 1959.

Feature Publications’ Trapped lasted for all of 34 issues. Its partner in crime was Guilty Detective Story Magazine and, according to Galactic Central, “Both determined to show that the spirit of the 1940s detective pulp magazines was still alive and well in the 1950s, albeit in a digest format.”

Schoenherr’s files for this phase of his career are far from complete, so there must be more illustrations out there, waiting to be identified. His reference photos might provide some clues, however: it’s just a matter of matching poses to magazine pictures. The following set, for example, was taken on March 19, 1959, for the Trapped cover.

Posted by Ian Schoenherr at 8:12 AM