Frank Herbert is purported to have said that John Schoenherr was “the only man who has ever visited Dune.”*

Well, thanks to Schoenherr’s work log, we can pinpoint the exact date of his first trip. Fifty years ago today - on August 7, 1963 - he was commissioned to make a cover and 18 spot illustrations for Parts 1, 2, and 3 of “Dune World” which was to be serialized in Analog Science Fact and Science Fiction starting with the December 1963 issue.

Schoenherr’s expense ledger also shows that on August 7, he took the subway from Queens to the Analog offices in Manhattan (only 15 cents a ride, then). Although he stopped at the offices the following day, too, he was probably given the manuscript during the first of these two visits.

It’s impossible - with Schoenherr’s own records, at least - to figure out which pictures emerged when. Presumably he took notes and doodled as he read or immediately after, and images gradually took shape in no particular order. One page from his oversized sketchbook shows some fairly well-conceived portraits of Dr. Wellington Yueh, with his “square block of a head with purple lips and drooping mustache, the diamond tattoo of Imperial Conditioning on his forehead, the long black hair caught in the Suk School’s silver ring at the left shoulder.” 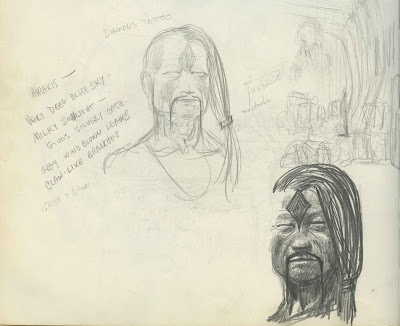 The final ink-on-scratchboard illustration of Yueh shows that Schoenherr stuck closely to his initial conception. 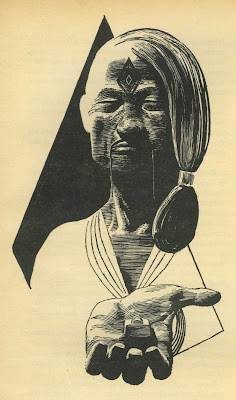 While sketching Yueh, Schoenherr also jotted down phrases to keep in mind when painting the planet Arrakis for the cover:

And another sketchbook contains an early incarnation of that world. 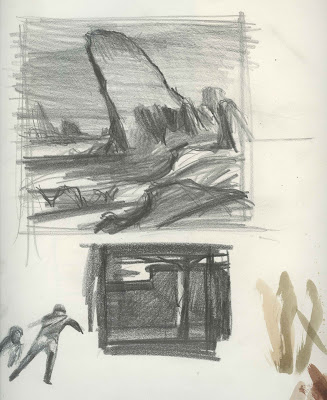 Fortunately, this was the brief phase in Analog’s history when the magazine’s format went from digest size to so-called “bedsheet” dimensions - and Schoenherr’s work was always helped by more expansive proportions. 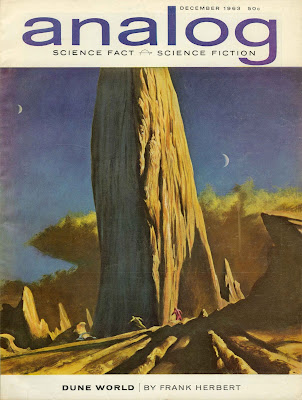 Frank Herbert was pleased with the results. In The Road to Dune he is quoted as saying:


Frequently, I have to ask myself if the artist was actually illustrating the story his work accompanied. Not so with John Schoenherr. His December cover caught with tremendous power and beauty the “Dune mood” I struggled so hard to create. It’s one of the few such works of which I’d like to have the original.

According to Analog editor John W. Campbell (quoted in the same book), this cover was “Schoenherr’s sixth attempt, I believe. Getting the feeling of desolation, danger, dryness and action was not easy; he earned his pay on that one!”

Yes, a cool $250. And did Herbert wind up with the original? I’m not sure. But stay tuned for more souvenirs from these first trips to “Dune World”.


*I’m on the lookout for the precise source for this quote, though it appeared in James E. Gunn’s The New Encyclopedia of Science Fiction (Viking, 1988).
Posted by Ian Schoenherr at 4:23 PM