“You did me and my dragons REAL PROUD”

My father didn’t keep a lot of his papers, but, fortunately, one of the letters he preserved was written by author Anne McCaffrey on September 15, 1967 - and which her son has graciously permitted me to reproduce here.

At that time, Dad had just finished illustrating McCaffrey’s early Pern stories for Analog magazine: “Weyr Search” in the October 1967 issue, and “Dragonrider” - in two parts - in the December 1967 and January 1968 issues. Barring any hypothetical doodles by McCaffrey, these illustrations represent the very first depictions of Pern and its inhabitants - just as his pictures for Frank Herbert’s Analog-serialized stories were the first depictions of Dune.

As McCaffrey mentions in the letter, the day before writing, she had the chance to look at a few proofs and originals in the Analog offices in Manhattan, in the presence of editor John W. Campbell and his longtime assistant, Kay Tarrant. As she alludes, too, my father (and mother, as well) were then on safari, as it were, to wolf-and-moose-inhabited Isle Royale in Lake Superior, near the Canadian border, to research his illustrations for The Big Island by Julian May (Chicago: Follett Publishing Company, 1968). By 1967 Dad had begun drifting away from science fiction, partly because he was doing more children’s books and wildlife paintings, and partly because Reader’s Digest, for example, paid about four times as much for a cover than Analog did. Loyalty to Campbell, his mentor and champion, could only go so far with a mortgage and two small kids in tow. (And on behalf of my family and my childhood home, I apologize.)

As you can see, instead of modeling his dragons on your usual, scaly European or Asian types, Dad went with something much more dinosaur-like and (to my mind) “real”. In fact, his dragons are more convincing than his humans, but that wasn’t uncommon for him. Unfortunately, the original drawings and paintings were sold long ago, so the accompanying images were scanned from Analog’s yellowed, halftone pages. But their power still comes through.

So, here’s a scan of the letter itself, followed by an illustrated transcription. Enjoy! 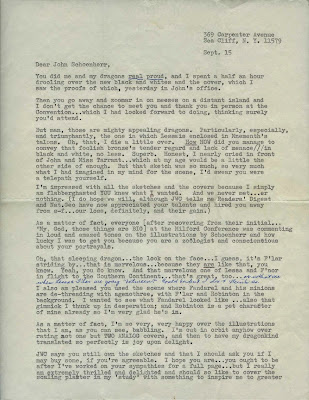 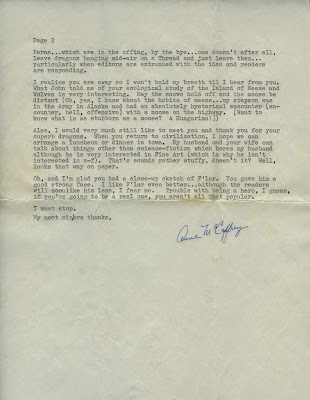 You did me and my dragons real proud and I spent a half an hour drooling over the new black and whites and the cover, which I saw the proofs of which, yesterday in John’s office.

Then you go away and zoomar in on meeses on a distant island and I don’t get the chance to meet you and thank you in person at the Convention…which I had looked forward to doing, thinking surely you'd attend. 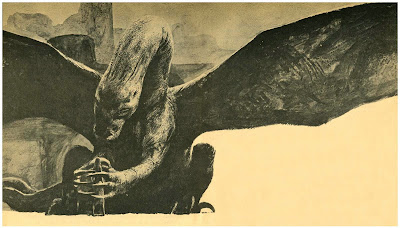 But man, those are mighty appealing dragons. Particularly, especially, and triumphantly, the one in which Lessa is enclosed in Mnementh’s talons. Oh, that, I die a little over. How HOW did you manage to convey that foolish bronze’s tender regard and lack of menace in black and white, no less. Superb. Honest, I nearly cried in front of John and Miss Tarrant...which at my age would be a little the other side of enough. But the sketch was so much, so very much what I had imagined in my mind for the scene, I’d swear you were a telepath yourself.

I’m impressed with all the sketches and the covers because I simply am flabbergasted YOU knew what I wanted. And we never met...er nothing. (I do hope we will, although JWC tells me Readers’ Digest and Nat.Geo have now appreciated your talents and hired you away from s-f...our loss, definitely, and their gain.)

As a matter of fact, everyone [after recovering from their initial...‘My God, those things are BIG] at the Milford Conference was commenting in loud and amazed tones on the illustrations by Schoenherr and how lucky I was to get you because you are a zoölogist and conscientious about your portrayals. 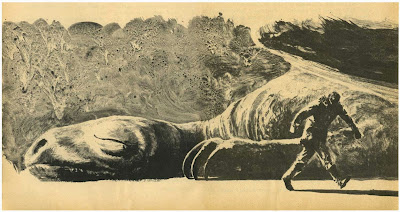 And that marvelous one of Lessa and F’nor in flight to the Southern Continent...that’s great, too...or is that one when Lessa + F’lar are going “between?” Could be but I don’t think so.

I also am pleased you used the scene where Fandarel and his minions are de-threading with agenothree, with F’lar and Robinton in the background. I wanted to see what Fandarel looked like...also that gimmick I thunk up in desperation; and Robinton is a pet character of mine already so I’m very glad he’s in. 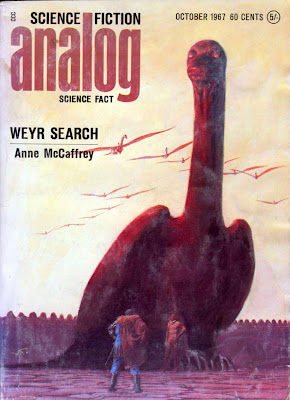 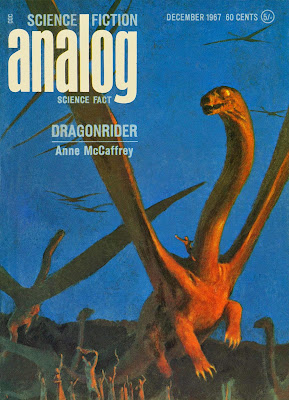 As a matter of fact, I am so very, very happy over the illustrations that I am, as you can see, babbling. I’m in orbit anyhow over rating not one but TWO ANALOG covers, and then to have my dragon kind translated so perfectly is joy upon delight.

JWC says you still own the sketches and that I should ask you if I may buy some, if you’re agreeable. I hope you are...you ought to be after I’ve worked on your sympathies for a full page...but I really am extremely thrilled and delighted and should so like to cover the scaling plaster in my ‘study’ with something to inspire me to greater Perns...which are in the offing, by the bye…one doesn’t after all, leave dragons hanging mid-air on a Thread and just leave them...particularly when editors are entranced with the idea and readers are responding.

I realize you are away so I won’t hold my breath til I hear from you. What John told me of your ecological study of the Island of Meese and Wolves is very interesting. May the snows hold off and the moose be distant (Oh, yes, I know about the habits of meese…my stepson was in the Army in Alaska and had an absolutely hysterical encounter (encounter, hell, offensive) with a moose on the highway. [Want to know what is as stubborn as a moose? A Hungarian!])

Also, I would very much still like to meet you and thank you for your superb dragons. When you return to civilization, I hope we can arrange a luncheon or dinner in town. My husband and your wife can talk about things others than science-fiction which bores my husband although he is very interested in Fine Art (which is why he isn’t interested in s-f). That’s sounds rather stuffy, doesn’t it? Well, looks that way on paper. 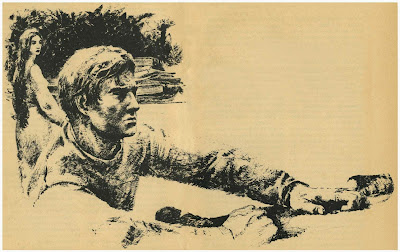 Oh, and I’m glad you had a close-up sketch of F’lar. You gave him a good strong face. I like F’lar even better... Also the readers will soon like him less, I fear me. Trouble with being a hero, I guess, if you're going to be a real one, you aren't all that popular.

My most sincere thanks,

Posted by Ian Schoenherr at 3:50 PM